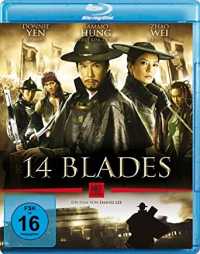 During the late Ming Dynasty, the imperial court is plagued by corruption and the reigning emperor is incompetent. The Jinyiwei is the government’s secret police, orphans trained in cruel clandestine combat since childhood, and serving the emperor only.

The Jinyiwei commander, Qinglong (Donnie Yen), is given a mechanical box of 14 blades to help him in his duties. Jia Jingzhong, the royal eunuch, plots rebellion with the emperor’s uncle, Prince Qing (Sammo Hung), who had been exiled for an unsuccessful rebellion.

Jia Jingzhong orders Qinglong to retrieve a safe box in the possession of the imperial councilor, Zhao Shenyang, whom he accuses of planning a revolt; Qinglong is told that the box contains proof of the councilor’s treason.

However, Qinglong soon discovers that the box actually contains the Imperial Seal, a symbol of the emperor’s authority, which Jia Jingzhong needs to legitimize Prince Qing’s authority. Qinglong is betrayed by his fellow Jinyiwei and his fellow officers are executed by his brother-at-arms,

Xuan Wu, who pledges himself and the Jinyiwei to Eunuch Jia. Prince Qing’s adoptive daughter Tuo-Tuo (Kate Tsui), a deadly warrior, arrives to lend her assistance on receiving news of Qinglong’s escape.