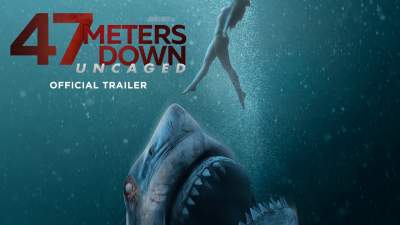 Closing out the summer with far greater efficiency than one might expect, the brisk, brutal sequel 47 Meters Down: Uncaged is notably impressive because it almost didn’t exist at all. Its predecessor was originally sentenced to a muted home entertainment premiere in 2016 before another studio picked it up, repackaged it and pushed it to the following summer, gifting it with a splashy theatrical bow. It paid off: the $5m budget film bit off a $62m worldwide gross, making it one of the most successful independent releases of 2017.

It told the story of sisters whose cage dive goes horribly wrong when a technical fault leaves them marooned in shark-infested water, stuck on the ocean floor. Despite its modest ambitions and solid reviews, I was still rather lukewarm on it, weary of its repetitive nature and aghast at its dim final twist. The follow-up retains the British director Johannes Roberts, who has since added a slick sheen to a mostly unnecessary Strangers sequel, and this time around he’s been given what feels like a slight upgrade in budget, working hard to make a film designated for the big rather than small screen. In what passes for a plot, four teenage girls make the ill-advised decision to explore an underwater Mayan temple and find themselves trapped, oxygen quickly decreasing and, yup, sharks quickly circling.