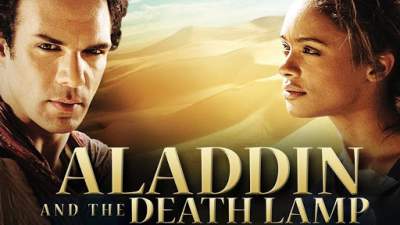 REVIEW: With my recent new-found love for classic fairy tales (thanks solely to being addicted to the new ABC show Once Upon A Time), I’ve been eating up these fairy tale B-Movies this year (Gretl: Witchslayer, Black Forest, Grimm’s Snow White, ect), and out of all those classic fairy tales, Aladdin is easily my favorite. So when I heard SyFy was doing their own Aladdin-themed movie titled Aladdin and the Death Lamp, of course I got excited to watch and review it, even though I was also a bit worried, knowing how some of their movies tend to turn out.

Right off the bat, Aladdin and the Death Lamp does an excellent job with combining ‘fantasy fairy tale’ (giant killer beasties, mystical amulets, and the magic of the Djinn) with ‘treasure hunt adventure’ (ancient book they discover that acts as a code to finding long-lost treasure, plenty of swash-buckling sword fights, and races against time). Actually, many parts of the movie felt very much like I was watching a low budget version of 1999’s The Mummy, or at the least a low budget made-for-TV sequel to it; the movie included a protector that tries to stop the Djinn from being re-awakened, our main group of heroes that try to stop it once they accidentally unleash it upon the world, a meaner second group of people that wish to use the creature for their own means but don’t quite understand its true power, and all of that is wrapped up within adventures through a desert and a race between the two groups to get to a mythical location first. If all of that sounds like it appeals to you, then this is probably one you’ll want to check out. There’s even a very Mummy-esque musical score which was put to good use throughout the movie, adding a very fitting tone to many of the scenes.

aladdin and the death lamp full movie in hindi