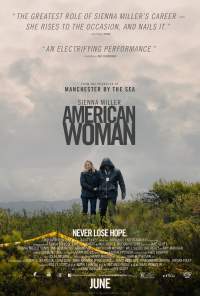 “American Woman,” directed by Jake Scott from a script by Brad Ingelsby, is, on its face, the kind of movie that many of us are afraid is getting squeezed out of the market by blockbusters and franchises. It’s a considered, conscientious character study chronicling the ups and, mostly, downs in the lives of its working-class subjects.

Deb (Sienna Miller) is a single mother in a hardscrabble rural Pennsylvania town. She gave birth to her daughter, Bridget, while she was still in her teens, and when the movie’s story begins in the early 2000s, the teenage Bridget (Sky Ferreira) has a child of her own. Their relationship is simultaneously fraught and playful. Deb’s relationships with her older sister, Katherine (Christina Hendricks), and her mother, Peggy (Amy Madigan), both conveniently parked across the street from Deb, are more on the consistently fraught side.