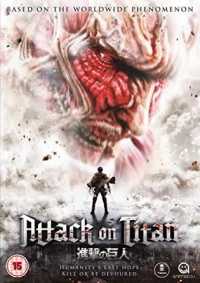 Attack on Titan, of course, is a massively successful—and popular—manga and anime series. This live-action entry is the Japanese film industry’s latest attempt to parlay manga and anime into cinema. Parlay? Sorry, plunder would be more fitting here.

Superficially, on Titan sure seems like, you guessed it, Attack on Titan. It’s got the name and the logo. There’s a walled city. There are Titans. They eat people. There are characters with names you find in AoT, doing things you see in the manga or the anime,

Such as flinging about via Three Dimensional Maneuver Gear, slicing down those flesh-eating giants. It all looks like Attack on Titan, but it’s not.