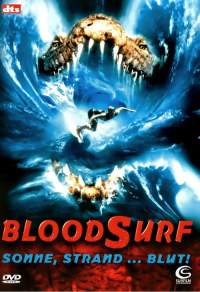 A couple of surfer dudes, a producer and a cinematographer go to some remote islands to film blood surfing. Blood surfing is the act of bloodying up the water to attract sharks then surfing amongst them, and hopefully avoiding death or dismemberment. After a successful round of blood surfing they encounter a huge 35 foot crocodile that’s way more dangerous than any shark they could have encountered.

I thought the ridiculous premise sounded somewhat fun and had me intrigued. I had some misconception that it was going to be people surfing and getting ate one by one for the whole movie. I wondered how that would could be cool but only one scene did they actually blood surf. The rest of the movie is running around the boat or the island trying to escape the giant crocodile.

Not sure while I kinda enjoyed the movie because most of it was pretty cliche and the actors were paper thin. The “dumb ass” surfer dude was actually more charismatic and cooler than the main hero guy. It was your average dialogue and felt very safe and Syfyish. As far as the giant croc effects I was mainly impressed. Instead of being all cgi like modern creature movies there was quite of bit of practical effects. The giant model they used for the croc did look a little stiff but was way better than shitty cgi effects you may be used to seeing. There are some terrible looking cgi scenes in the last act when the croc is chasing them but for the most part it was acceptable. There wasn’t tons of gore but you do get a couple of people eaten and a dude’s torso is ripped off.