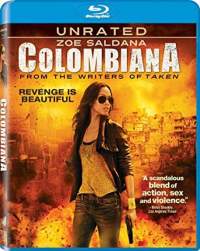 PARIS — Jean-Luc Godard’s famous remark that all you need to make a movie is “a girl and a gun” doesn’t quite hold water for Luc Besson. In his world, you need one girl wearing as little as possible, and at least fifty guns, preferably firing at the same time. Such is the formula applied to Colombiana, the latest EuropaCorp effort produced and co-scripted by Besson, and directed by in-house auteur Olivier Megaton, whose mise-en-scène is often as subtle as his last name sounds. Still, there are guilty pleasures to be had in this frenzied B starring Zoe Saldana (Avatar, Star Trek), who gives an acrobatic performance that makes the overcooked material watchable, if not entirely enjoyable.

The $40 million, English-language actioner rolls out in France July 27, while Sony offshoot Stage 6 Films will handle all media in the U.S. In both cases, the movie’s promise — more than fulfilled — to dish out plenty of bullets and bras should help boost opening numbers, followed by solid back-end business alongside EuropaCorp franchises Hitman and Transporter (the third installment of which was directed by Megaton).