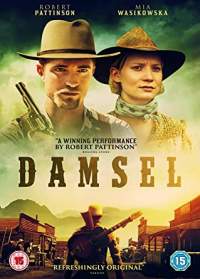 Few filmmakers earn the adjective “offbeat” as definitively as the Zellner brothers, David and Nathan, whose new Western (premiering at Sundance), Damsel, is a goof on the genre in which no trope is left unmolested and nothing goes the way it’s supposed to. Probably you should clear your head and go in thinking you’re going to see a conventional Old West kidnapping adventure story. Then you’ll be delighted or possibly irritated when it turns out to be a clown show with instances of carnage. I was alternately delighted and irritated, though mostly a very happy camper.

Robert Pattinson is top billed as Samuel, the earnest would-be savior who heads way, way West (to the ocean, in fact) to rescue his true love, Penelope (Mia Wasikowska), from a kidnapper holed up with her in a little house in the middle of nowhere. He’s the nominal hero — as well as a sometime troubadour who strums his guitar by a campfire and sings a ballad of love called “Honeybun.” (“You’re my honeybun / my honeybun / my honeybun…”)

Samuel has things all planned out. He has even hired a parson to accompany him and marry the pair after he saves Penelope and gets down on his knees and proposes. He’s toting a gift for her, a miniature horse he calls Butterscotch, after her favorite candy. The little horse, by the way, appeared onstage at Sundance after the film, though mostly turned away from the audience, unaccustomed to rich people with second homes wielding cell phones and industry types holding forth on other movies. (“It was gripping, I thought.” “Definitely third-act problems, though.” “Oh, definitely.”) In a cute touch, the audience left the theater to find Sundance volunteers handing out butterscotch candies. (As I write this on Wednesday, January 24, it’s Sundance Volunteer Appreciation Day.)