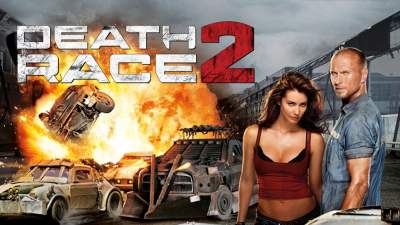 If you’re anything like me, then you’ll normally read the introduction of a review and skip to the end for the star rating, until after you’ve seen the film. In which case, I’ll take this opportunity to point out, straight away, that Death Race 2 is fantastic, bloody, fun and delivers in every way you’d expect, and in many ways, better.

Made as part of Universal Studios Home Entertainment wing, it has been pitched perfectly as the kind of action movie night in that so many of us were raised on, aimed directly at its audience with no pretensions and without the extortionate amounts of money that most films have to shell out for any chance of a decent cinematic release.

What’s changed, though, since the DTV (direct to video) days of sequels in this case, is the quality in all areas of production and casting. After being left feeling short changed by the lack of screen time in Universal Soldier: Regeneration given to cover stars Jean-Claude Van Damme and Dolph Lundgren, I was fully prepared for Death Race 2‘s stellar supporting cast of Sean Bean, Danny Trejo and Ving Rhames to be conveniently killed off within minutes of appearing. Instead, all three of them have consistently important roles throughout.