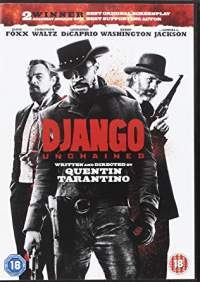 History gets another dramatic rewrite, Quentin Tarantino-style, in Django Unchained, a jokey, discursive, idiosyncratic and spirited film that does to slave owners what Inglourious Basterds did to Nazis.

Applying the episodic format and visual template of classic and spaghetti Westerns to a revenge saga mostly set in the Deep South just before the Civil War, the film makes a point of pushing the savagery of slavery to the forefront but does so in a way that rather amazingly dovetails with the heightened historical, stylistic and comic sensibilities at play. The anecdotal, odyssey-like structure of this long, talky saga could be considered indulgent, but Tarantino injects the weighty material with so many jocular, startling and unexpected touches that it’s constantly stimulating. A stellar cast and strong action and comedy elements will attract a good-sized audience internationally, though distaste for the subject matter and the irreverent take on a tragic subject might make some prospective viewers hesitate.

Tarantino’s affinity for black culture and interest in the ways blacks and whites relate always have been evident, but they’ve never before been front and center to the extent that they are in Django Unchained. Some might object to the writer-director’s tone, historical liberties, comic japes or other issues, but there can be no question who gets the shaft here: This is a story of justifiable vengeance, pure and simple, and no paleface is spared, even the good German who facilitates a slave’s transformation into a take-no-prisoners hunter of whites who trade in black flesh.

At its core, then, the film entirely shares its raison d’etre with Basterds, which climaxed with a conflagration that fancifully obliterated the Nazi regime. It’s presented, however, as a lengthy journey, one that feels — both in its equivalent running time and luxuriant magnification of arguably incidental matters — quite like Sergio Leone’s great The Good, the Bad and the Ugly. All the same, a lesser-known Italian director of many Westerns, Sergio Corbucci, is Tarantino’s declared touchstone here. Corbucci made the original Django, starring Franco Nero, in 1966, after which there were dozens of unofficial sequels, though none made by Corbucci. (Nero makes a brief appearance here, and in the spirit of European credit lines for famous actors playing small roles in movies, Tarantino amusingly employs the literal translation, “With the friendly participation of Franco Nero.”)