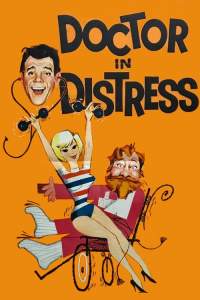 As noted in the introduction to the screening of Doctor in the House, the comedy can hardly be described as a melodrama. We showed it due to the important place it has in Dirk Bogarde’s screen image. The film was hugely popular in the UK in the year of its release (1954). It also had an afterlife as Bogarde continued to play the role of Simon Sparrow in later films in the series (all directed by Ralph Thomas and produced by Betty Box): Doctor at Sea (1955), Doctor at Large (1957), Doctor in Distress (1963) and a cameo as Simon Sparrow in Wendy Toye’s non-Doctor film We Joined the Navy (1962). This was significantly the only screen character Bogarde played more than once,

though he did not appear in the films Doctor in Love (1960), Doctor in Clover (1966) or Doctor in Trouble (1970). It is likely that audiences from the time would have especially connected Bogarde to Simon Sparrow. In the text below, I therefore go into some detail on Simon Sparrow’s personality and Bogarde’s interpretation of the role. This is aided by some consideration of the film’s other characters. Our post-film discussion also touched on how we as modern audience members viewed the film today. For many of us, this was shaped by our knowledge of the film’s sequels and its similarity to the humour exhibited in the ‘Carry On’ series of films (1958-1992). This brought up the matter of sexism, as well as differences in generational and national perspectives. I briefly discuss some of these matters in relation to the film’s reception on its 1955 US release.