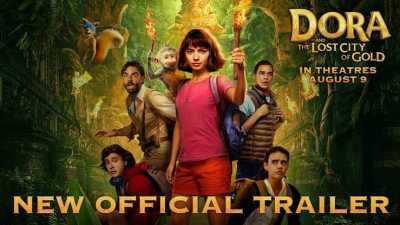 Dora and the Lost City of Gold Put under a microscope, any kids’ show is at least a little bit weird. The long-running animated “Dora the Explorer” is no exception, hinging on fourth wall-crashing moments in which the plucky eponymous heroine stops to help teach her audience basic

Spanish, while often adventuring through a jungle filled with solvable puzzles, talking backpacks, and a sweet monkey who frequently wears rainboots (his name is, of course, Boots). Fortunately, everyone involved with the live-action spin on the Nickelodeon series,

Dora and the Lost City of Gold,” is well-aware of that fact, happily marrying the odder elements of the animated series and a fizzy “real world” adventure to delightful effect.

Tellingly, James Bobin’s film opens with a glimpse at what a faithful live-action take on the nearly two decade-old series might look like: a pair of grinning kids trundling through the jungle, aided by anthropomorphic hiking supplies and animal pals

eagerly teaching conversational Spanish along the way. Transferred into the live-action world, it of course looks silly, and when young Dora (Madelyn Miranda) suddenly turns to the camera and starts talking to a nonexistent audience, her own parents (Eva Longoria and Michael Peña) amusingly shrug it off. Surely, she’ll grow out of it!