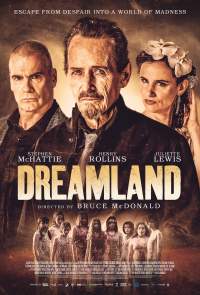 The latest film from iconoclastic Canadian filmmaker Bruce McDonald proves at least one thing: The only thing better than Stephen McHattie in a movie is two Stephen McHatties. Playing both a heroin-addicted jazz trumpet player and a hitman who develops a conscience, the veteran character actor — you’ll immediately recognize his face even if his name doesn’t ring any bells — grounds Dreamland in emotional depths it otherwise strains to achieve.

McDonald is best known for his cult 2008 zombie horror film Pontypool, of which this film is a sort of spiritual successor. The aptly named Dreamland also reunites the director with that film’s star, McHattie, and screenwriter Tony Burgess, who co-scripted this effort with Patrick Whistler.

In a director’s note, McDonald acknowledges myriad influences, ranging from directors David Lynch and Luis Buñuel to writers William Burroughs and Raymond Chandler. Their distinctive styles are amply on display in this surreal, noirish tale in which logic and narrative coherence are not exactly in the forefront. The filmmaker admits, “It’s probably a movie that should not have been made, because it does so much that is wrong. But that is also why I love it.