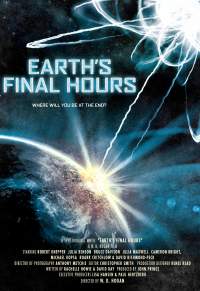 Earth’s Final Hours ia a made-for-TV movie broadcast on the SyFy channel and it kind of blows. The reason it’s bad isn’t because of the acting, which is actually pretty good. It isn’t because of the effects, which are better than average for a TV movie. It isn’t because of the ridiculous plot, because hey, if you’ve signed on for a TV movie from the SyFy channel, you’re pretty much willing to accept anything—including, in this case, a rain of super-dense radioactive meteorites that punch a hole straight through Earth, impacting in Washington State and with an exit wound straight through Australia.

The effect of this is—of course!—to halt the Earth’s rotation, pretty much on the spot. If you’re watching a TV movie on the SyFy channel, none of this should surprise you, let alone bother you.

No, the reason Earth’s Final Hours kind of blows is because it’s a non-sci-fi movie masquerading as a sci-fi movie. In fact, apart from the premise (Earth stops rotating) there’s nothing particuarly science-fictiony at all going on here. Instead we have FBI agents chasing each other in SUVs and and taking potshots at every opportunity; we have single dads and estranged sons trying to find a way to start over again and make it work (yawn); we have the brilliant teenaged bad boy who makes his own rules but has no respect for what adults want to impose on him; in other words, we have every tired cliché in the book, that book being How to Write a Movie Screenplay That’s Extraordinarily Lame.