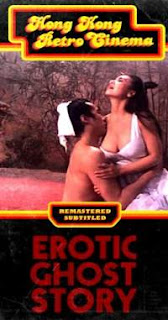 The film has its origins as a tale from Liaozhai Zhiyi aka Strange Stories from a Chinese Studio aka Strange Tales of Liaozhai, written by Pu Songling (1640-1715) during the early Qing Dynasty. This is a collection of 431 stories written in classical Chinese (not the usual form for the time.) The earliest existing printed version dates to 1766, but it may have been published earlier. Pu Songling was a former scholar himself, which may explain why a scholar becomes the central figure of some many of his tales. Stories from Liao zhai Zhiyi have inspired countless Chinese films and television shows. Painted Skin, Tsui Hark’s A Chinese Ghost Story, and several TV shows with fox spirits. You can read many of the translated tales here. Many stories are short, as what was important was the emotional response, not the details.