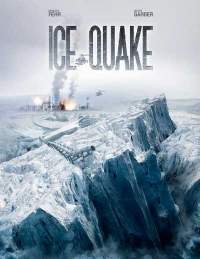 Ice Quake – otherwise known as let’s traipse up and down a mountain is a TV disaster movie that limps along from shaky camera to shaky camera and failed to capture my attention despite a high-profile name and some competent acting.

A mountain is busy farting with a methane problem and is releasing sub-zero gases via Earthquakes. Think an ice volcano with a belly ache and you’re there.

Ice Quake for a TV movie really isn’t that bad. Maybe that’s part of the problem. The film bubbles along from one mini problem to another although most quakes look identical. The film wisely stays to just a single mountain and has most of its action take place in nondescript locations in the snow. For that, the film is then able to tightly weave you from problem to problem until it comes to the final section where it moves to a small town for its finale. The acting, in general, is of a good standard and despite some dodgy science having an actor such as Victor Garber (Titanic) really helps. What I will say is that he is the most ineffectual leader in a crisis ever committed to film. Now we just need to make the typical whiny teen girl shut up a bit and the film would have been more enjoyable!