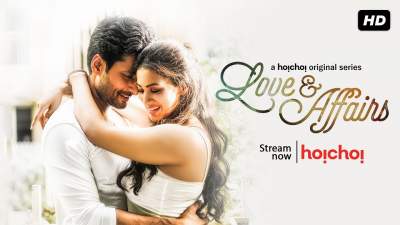 Love and Affairs Bengali Web Series is a mini-series revolving around a lovely married couple Abhijit and Roshni. Abhi is a film star in Kolkata who is facing tough times due to the shut down of one of his most popular television shows. As a result, the couple has to sell off their car. Love and Affairs Hoichoi explores the emotional settling of a young couple from a psycological acceptance of each other’s flaws and baggage.

However, Abhi discovers that Roshni is into buying a lot of highly expensive stuff—from a 5-lac gold necklace to an exemplary Rolex watch on Abhi’s birthday. On asking Roshni multiple times, she says that these were gifts from her father. When Abhi tries to verify, he finds that although Roshni hailed from an affluent family, her father could barely afford his own medical expenses. In addition to expensive accessories, their house is running on EMI with a gap of 2 months. Roshni starts decorating their dwelling place with antique showpieces and costly imported décor items.

Love and Affairs (2020) get complicated and emotional turmoil sets in when Roshni starts believing that Abhi is having an affair and on the final 5th episode of confession, it gets revealed that Roshni is a patient of kleptomania.