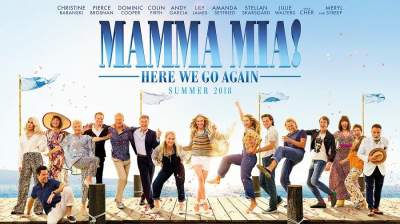 So let me get this straight. You want to make a sequel to a very popular movie (based on an even more popular musical) whose best asset was Meryl Streep, a very famous actor, who after decades of intergalactic acclaim, was unveiled, at last, as a major movie star. And you’re going to make that film — “Mamma Mia! Here We Go Again” — with every other member of the movie’s original cast, except for her but including poor Pierce Brosnan, whose singing, as a lovelorn widower, remains a dare to file a noise complaint.

And you’re going to keep the musical’s Abba-centric conceit — only you used up all the great Abba songs the first time. So now you’ve got to lean on second- and third-tier stuff like “My Love, My Life,” “I’ve Been Waiting for You” and “Kisses of Fire.” And because you suspect some of us might, not unreasonably, prefer numbers set to “Dancing Queen” and “Waterloo,” and because you’re running embarrassingly low on credible options, you recycle those songs, but with as little movie-musical imagination as you can get away with.

Now you don’t have Ms. Streep as Donna, the American proprietress of a Greek villa, and so because of scheduling, money, perhaps Ms. Streep’s dignity, you’ve killed Donna off. But you still need an element that lends the proceedings a whiff of showbiz. So you import the opposite of Meryl Streep. You import someone with one screen self (and one name!) as opposed to dozens, someone with buoyancy, immortality and a welcome sense of campiness, someone who can sing. You bring in Cher. But you don’t bring her aboard to play Donna’s sister, childhood bestie, long-lost lover or even rival Mediterranean hotelier. You hire Cher (who’s 72 to Ms. Streep’s 69) to play — oh, I can’t. Do I have to?