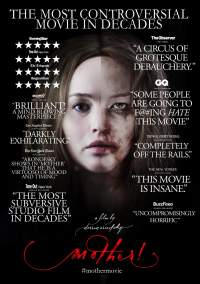 Nothing is ever enough – I couldn’t create if it was!” You have to admire writer-director Darren Aronofsky’s almost religious devotion to the parable-like possibilities of hyperventilating, surrealist cinema. Having caught critics’ attention with the cult low-budget sci-fi oddity Pi and proved his gritty mettle with Requiem for a Dream, Aronofsky gave us time-straddling cosmic madness in The Fountain, combined ballet with metamorphic fantasy in Black Swan, and conjured gigantic rock-monsters in the quasi-biblical babble-fest Noah. Now with Mother!, a paranoid nightmare that starts out like Polanski’s Repulsion and winds up closer to Apocalypse Now, he has stretched the envelope of outrageous mainstream cinema to breaking point – and beyond.

We start and end in flames, with an image of a fiery face giving way to a mysterious crystal, which breathes life and light into a charred, blackened house. This is the home of Javier Bardem’s “Him” (all characters are unnamed), nurtured anew by Jennifer Lawrence’s devoted wife. Octagonal in shape, the house variously resembles a vast temple and a panopticon prison, with a sinister hint of the haunted lair from The Amityville Horror. It is a living presence, with a heartbeat that thrums through its walls and floorboards, umbilically linked to Lawrence’s barefoot “Mother” who harbours as-yet-unrealised dreams of parenthood.