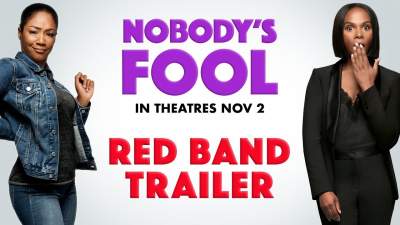 Go figure — Tyler Perry’s most focused film to date still feels like assembly footage from someone else’s TV series. But that’s not always a bad thing, it turns out. Especially when you’ve got Tiffany Haddish running through your scenes, wild and profane and free. In Nobody’s Fool, she plays a recently released ex-con who comes to stay with her extremely professional and well-heeled sister (Tika Sumpter): the former upends the latter’s life. It should be a typical odd couple scenario, but since this is Tyler Perry we’re talking about, it’s something like five movies in one. Or maybe it’s five movies in two. Or six movies in three. It’s a mess, whatever it is, but it’s not without its charms.

First, we’re introduced to ambitious advertising executive Danica (Sumpter), who’s been carrying on a passionate, long-distance love affair with a man she’s only known online, while ignoring Frank (Omari Hardwick), the clearly smitten hunky coffee shop owner she sees every day. Danica’s had difficulty committing because she’s obsessed with The List, a litany of features she’s written down that she thinks her perfect man must have. (“Tall, handsome, great body, good job, professional, has never been to jail, no baby mama drama,” etc.) Her best friend and work colleague Callie (Amber Riley) also has a List, which she has also written down. Indeed, their marketing company has just been signed to do a huge new campaign for a French perfume targeted to single women, called “The List.” Which begs the question: How widespread does Tyler Perry think this whole List thing is?