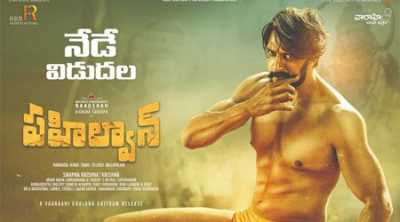 Phelwaan Story: When seasoned ‘pailwaan’ Sardar (Sunil Shetty) meets little Krishna aka Khichcha (Khichcha Sudeep), who’s an orphan, he sees tremendous potential in him to become a great wrestler someday. Once convinced, Sardar takes him under his wings and raises Krishna as his own son, but that relationship turns tumultuous owing to a series of unfortunate events and unavoidable circumstances.

Phelwaan Review: In the dubbed, Hindi version of director Krishna’s ‘Pailwaan’, titled ‘Pehlwaan’, we see an intensely strict, yet loving father-figure, a trainer named Sarkar (Suniel Shetty). His disciple, Krishna, is devoted to his trainer and considers him more than just that – Sarkar is the closest thing he has to a family. And together, they harbour the dream of Krishna lifting the national wrestling championship trophy someday. But, as fate would have it, nothing goes as per their plan and the duo has to embark on a journey that is filled with ups and downs.