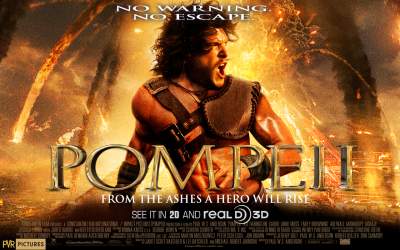 The lava flows by the ton, as does the cheese, in Pompeii, a kitschy apocalyptic peplum whose visual epiphanies — of which there are definitely a few — cannot outdo a B- (or C- or D-) grade scenario that will have lots of eyes rolling by the time the big stack finally blows. Not that one would expect less from Resident Evil mastermind Paul W.S. Anderson, who clearly seems to be getting off on the massive destruction that this $100 million effects extravaganza allows him to unleash onscreen. But with a central love story that feels contrived from the very first note, the major pleasure here is seeing it all blown to smithereens as quickly as possible, resulting in a movie that will have far less staying power than Pompeii’s infamous ash-covered victims.

With Sony’s TriStar rolling out the film in the U.S. this Friday and facing little new competition, the Germany-Canada co-production could make a fast killing in its first frame, though it won’t stick around for long. Pompeii’s overall theatrical gross could outperform Anderson’s The Three Musketeers but probably won’t reach Evil levels, while steady ancillary returns are a given.