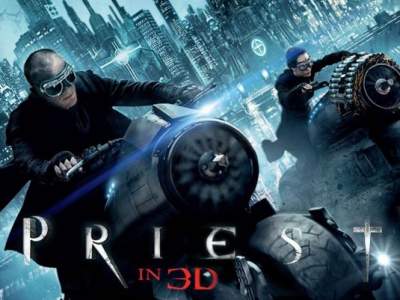 “The Da Vinci Code’s” Paul Bettany dons another cleric robe for a creature feature that borrows heavily from various film formulas.
LONDON — Priest, directed by Scott Stewart, is a short, dour and stodgy creature feature with average 3D effects that draws on so many film influences from westerns, action adventures and sci-fi tales that what fun there is comes from spotting the many sources.

Set in some nameless apocalyptic past or future it’s a vicars-versus-vampires yarn that aside from a short animated scene setter at the start and the long credits crawl at the end lasts for about 80 minutes. Lacking marquee names and much in the way of thrills, it’s unlikely to linger very long at the local multiplex and the blatant set up for a sequel after the climactic battle appears almost pitiable.

The animated sequence establishes that mankind has retreated within the giant walls of vile, polluted cities after innumerable battles with their vampire enemies, who are now confined to hideous underground camps a long way away.

All that corporal mortification in The Da Vinci Code was apparently not enough for Paul Bettany. He has the title role of another venomous cleric known only as Priest, who this time has been put out to pasture by the church that rules with an iron fist over what’s left of humankind.