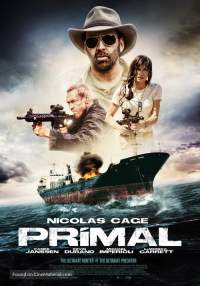 “Primal” isn’t just a title that’s been used many times, it’s now a movie that seems to have put several prior movies in a food processor — to results that are edible, but unsurprisingly don’t taste like anything in particular, let alone induce a desire for seconds. This first directorial feature by longtime stunt coordinator Nicholas Powell stars the inescapable Nicolas Cage (in at least his fifth film of the year) as a grumpier Indiana Jones-type adventurer on a boat with dangerous wild animals as well as a world-class terrorist on the loose.

That this mashup of too many familiar action-thriller elements doesn’t emerge a generic mess is a credit to all involved. That it’s passably entertaining but also instantly forgettable comes as less of a surprise.

The stale musk of bad latterday jungle movies like “Congo” hangs over the initial going, when Cage’s professional hunter Frank Walsh is in the Brazilian rainforest trapping critters to sell to zoos. Though he’s nearly killed doing it, he has extraordinary luck bagging an ultra-rare white jaguar that will no doubt send buyers’ bidding into the stratosphere. As he prepares to transport his haul back to the States, however, he’s irked to find his driver has quit — this feline is a fabled “ghost cat” which villagers used to fear (and to whom they’d sacrifice children to appease), and they superstitiously refuse to participate in its removal. Walsh condescendingly laughs off such concerns as Club Med-worthy tropical party music plays, setting a smirking retro-colonialist tone that fortunately the film soon abandons, more or less.