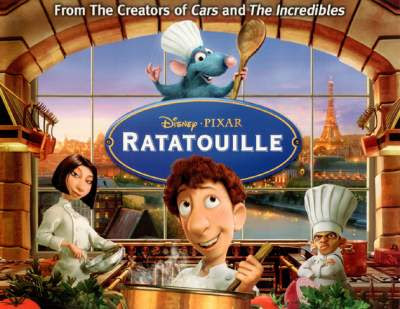 Brad Bird and Pixar Animation Studios are proving to be an unbeatable combination. Bird, the cartoon writer-director with delightfully off-kilter sensibilities, and Pixar, the cutting-edge computer-animation company that places so very much emphasis on character, have their second hit together in Ratatouille, a follow-up to the universally popular The Incredibles. Who would think a rat in a restaurant’s kitchen would induce anything other than comic slapstick involving knives and cleavers flying in all directions? Yet Bird builds a comic world in which a rat can become a chef and food can take on an almost unbearable sensuality.

Yes, there’s something in the kitchen for everyone in Ratatouille, so the Mouse House should clear a wing in its hall of fame for Cousin Rat. Ratatouille might not reach the international boxoffice heights of The Incredibles — then again, maybe it will — but the film does rep another huge leap in CGI technique and imagination by the Pixar folks.

Heroes with impossible dreams are the stuff movies are made of. But Ratatouille gives us two seemingly hapless protagonists battling impossible odds. The first is Remy (voiced by comic Patton Oswalt), an uncommon French rat who refuses to nibble on garbage. Mais non, he prefers haute cuisine delicacies out of human kitchens. Indeed, his hero is Paris’ culinary superstar Auguste Gusteau, whose motto — and best-selling book — is Anybody Can Cook. But did Gusteau have Remy in mind?