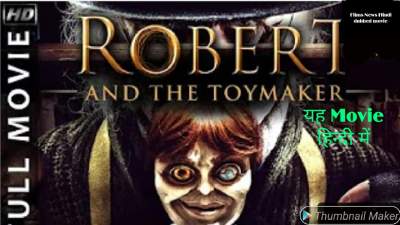 I previously self-imposed a moratorium on reviewing North Bank Entertainment releases because their quantity-over-quality culture peddles cheapo DTV hack jobs. Not only are their movies not enjoyable, but they show zero ambition to improve and the only horror on hand exists in consistently poor production values. Continuing to critically shoot fish in their barrel of B-movie badness isn’t an ideal use of anyone’s time.

Then I discovered that the German home video release of North Bank’s “A Haunting at the Rectory” (review here) falsely attributes positive praise to me when I said nothing of the sort. As far as I’m concerned, I’m now relieved of any conscientious courtesy to let North Bank go unnoticed as harmless. Someone should take them to task for churning out chunder because phony reviews and fabricated pull-quotes aren’t telling the truth.

As I similarly admitted in my review of “The Curse of Robert” (review here), which was the first sequel to “Robert” (review here) and predecessor to this third chapter in the dopey doll saga, partial blame falls on me for choosing to watch “Robert and the Toymaker” in the first place. After two dreadful movies, I know I’m signing up for a regrettable waste of 85 minutes. Although plans for an upcoming fourth film threaten to finally alter this tradition, I can’t seem to say no to additional installments when I’ve previously seen every other entry in a fright film franchise, no matter how dismal the series. If I suffered through three awful “Bunnyman” movies, I may as well endure three of these too.

“Robert and the Toymaker” opens in 1941 Nazi Germany, where everyone speaks English and scenery is set with black-and-white B-roll of submarines, airplanes, marching troops, and other stock footage clips having nothing to do with anything. For nearly a full half-hour, neither hide nor hair is seen of either title character. Instead, three German officers laboriously interrogate a farmer’s family regarding the whereabouts of a fugitive hiding in their house.

Why does “Robert and the Toymaker” spend one-third of its time establishing secondary characters during an absurdly chatty prologue? Because the script has so little substance that six people speaking inside a room for 30 minutes becomes a necessary tactic to draw out the film to feature-length.