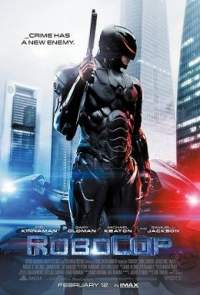 fter the dunderheaded remake of Total Recall (lift shafts through the centre of the Earth? WTF?), genre fans had every right to be trepidatious about a retooling of RoboCop. The departure of Darren Aronofsky, who was confirmed to direct back in 2008, along with troubling reports about new incumbent José Padilha’s fights with the producers, added to the air of doom and despondency. Yet against the odds, this emerges as far less depressing fare than one might have expected, retaining the key elements of political satire (fascist law enforcement) and philosophical musings (man v machine) that powered Verhoeven’s original.

Stepping into Peter Weller’s shoes, Joel Kinnaman provides the fleshy body parts, which are duly encased within a cybernetic suit – a cynical ploy to get round regulations outlawing robot “weapons” on American soil. Presented as little more than a disembodied assortment of head, lungs and hand (some very effective special effects), Murphy becomes a latterday Tin Man – the song from The Wizard of Oz is a recurrent taunt – his limbs hacked away, still dreaming of a human heart.

But does Murphy have “free will” or have his emotions been overridden by medicine and machines? Can he still be a father and husband, a head-bashing Him to the forthcoming Her?

Modern anxieties about deadly war drones and automated domestic responses are efficiently mined, while Michael Keaton and Gary Oldman (both graduates of the various Batman film franchises) make the most of their respective roles as slimy corporate exec and horribly compromised scientist.