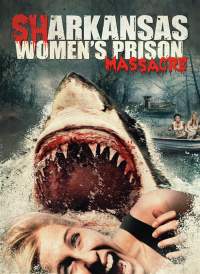 I am going to break this post in to two parts. The first part being a simple review of the film’s pros and cons…the second part unleashes my love of sharks and includes a rant about something really cool that I noticed about this film.

I absolutely loved this movie! The only reason I gave it a B+ instead of an A is because I slightly enjoyed Jersey Shore Shark Attack (2012) more so I had to prioritize. I will be clear; this film is a B horror film that incorporates a lofty flavoring of cheese with its horror. If you are looking for super special effects or a really scary plot, then this movie might not be for you (although I still suggest you give it a shot).

Sharkansas has amazing one-liners, great characters, ridiculous plot scenarios, and Traci Lords. Traci Lords plays Detective Patterson, who searches for the escaped prisoners: Sara Mason (Skye McDonald) who served time for aggravated assault, armed robbery, and resisting arrest, Michelle Alika (Christine Nguyen) aka “Soy Sauce” who is in the hoosegow for bootlegging videos and interstate flight, Shannon Hastings (Amy Holt) doing time for assault and battery, Samantha Pines (Tabitha Marie) in for drug trafficking and possession, and Anita Conners (Cyndy Lucas) who is behind bars for prostitution and drug trafficking. Anita and her girlfriend “Honey” (Dominique Swain) mastermind the escape plan and take the rest of the reluctant crew along for the ride. What they didn’t count on is the unintended release of Sharkasaurus on the same fateful day of their escape. For an indication of the film’s genius, here’s some of the dialogue, “If you bitches hadn’t done what you done, I’d be sitting in a warm cell waiting for my dinner like these sharks.