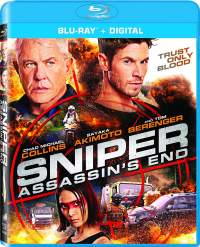 Synopsis :Special Ops sniper Brandon Beckett (Chad Michael Collins, Call of Duty: Modern Warfare) is set up as the primary suspect for the murder of a foreign dignitary on the eve of signing a high-profile trade agreement with the United States. Narrowly escaping death, Beckett realizes that there may be a dark operative working within the government, and partners with the only person whom he can trust: his father, legendary sniper Sgt. Thomas Beckett (*Golden Globe® winner Tom Berenger). Both Becketts are on the run from the CIA, Russian mercenaries and Lady Death, a Yakuza-trained assassin (Japanese actress and singer Sayaka Akimoto in her Hollywood film debut) with sniper skills that rival both sharpshooters.

I was pumped when the trailer dropped for this. Having been a fan of Tom, The Sniper franchise and Chad for some time now. I had to see this. And see it I did.

Going from what the trailers had shown, I thought it was going to be a little like ‘Angel Has Fallen’. Brandon getting framed for a murder then seeking shelter at his dad’s house in the woods. Then fighting off waves etc. Though we didn’t get that as such, the whole woodland set piece was tense. I found myself worrying about Beckett Sr & Jr. A highlight of the movie was a moment of silence where Beckett Sr & Jr are hunting or being hunted by an assassin. The screen splits into three sections from each person’s point of view and we see what they see. It’s quite a tense scene and reminded me of the standoff in The Good, The Bad & The Ugly.