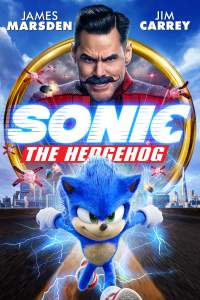 When the first trailer for Sonic the Hedgehog was released in 2019, fans were horrified by CGI Sonic’s beady little eyes and human teeth — an uncanny valley horror. He had a face that was asking a lot of a mother to love, let alone moviegoers. So Paramount pushed back the movie’s release date and brought in animator Tyson Hesse, art director for Sonic Mania Adventures, to lead the redesign. Not only did the animators go above and beyond in fixing Sonic to look more like his video game origins, but they might’ve saved the movie.

The new Sonic is so adorable that it almost makes up for a pretty generic plot and a human cast that play the roles of “heroic” and “bad” so straight, they could be extras in The Good Place. To run away from villains after his superspeed power, Sonic (voiced by Ben Schwartz) leaves his planet via magical portal rings to find himself on Earth in the small town of Green Hills. We find out that his fast-talking personality is basically a result of 10 years of intense isolation, having to hide from the townspeople and keep himself entertained by talking to himself. After causing an energy surge that shuts down the town’s power, the government sends Dr. Robotnik (Jim Carrey) to investigate. Sonic partners up with good-hearted sheriff Tom (James Marsden), and the two develop a bromance the way men are prescribed to in movies, through a road trip and a bar fight.