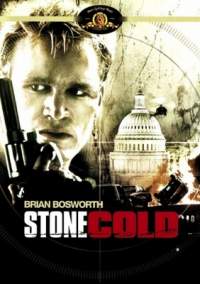 Joe Huff, a suspended, tough guy cop, is recruited by the FBI to infiltrate the Brotherhood, a white supremacist biker gang planning revenge after one of their crew is sentenced to life in prison, and adopts the alias John Stone to go undercover and stop them…

It’s hard to take Stone Cold at any point seriously, and you have to wonder how anyone at the time tried to either – 1991 comparatively wasn’t that long ago. There are times when you sense Craig R. Baxley’s pulp action thriller understands how silly it is, and times it occasionally gets lost in its own machismo. If you can imagine an ultra-violent, bigger budget episode of Sons of Anarchy, with the melodrama and cheesy hysteria dialled up to eleven, that’s pretty much Baxley’s film in a nutshell. It was a starring feature for Brian Bosworth, a former NFL linebacker and one of the highest paid football players in history, who like plenty of sportsmen before him attempted to translate his toned bulk into a cool, recalcitrant on-screen action man persona – here as Joe Huff aka John Stone, a hard-living cop on suspension corralled by the FBI into going undercover within a white supremacist organisation of organised criminals. All fine, all set up for Bosworth to take names, kick ass etc… and while he does have a certain appealing, nonchalant badass cool, he lacks the same leading man charisma that gave Arnie, Bruce or Sly their careers. Plus, let’s not even talk about that mullet!