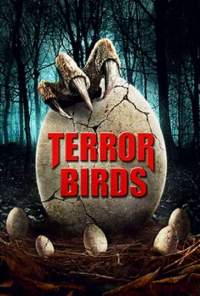 Whether its rampaging dinosaurs, flying pterosaurs or giant marine reptiles, the prehistoric world has given us no shortage of potential movie monsters to wreak havoc on the unsuspecting citizens of the modern world. With so many fantastic prehistoric animals to choose from, it is perhaps disappointing that so many filmmakers stick rigidly to the tried and tested ‘big 3’, the T. rex type, the ‘raptor’ type and the generic flying type. One fairly neglected branch of prehistoric predator is the phorusrhacidae, AKA the terror birds, a lineage of ground-based birds that could grow up to ten feet tall, sporting a head the size of a horse’s that was tipped with a cruelly sharp beak. A pretty cool scene in the otherwise forgettable 10,000 BC notwithstanding, the terror birds have been remarkably underused in terms of creature feature films.

One filmmaker who decided it was high time to give the terror birds their moment in the sun and make them the stars of their own movie is Jurassic City director Sean Cain. His film, Terror Birds, sees a group of high-spirited youngsters trespassing on private property in order to find one of their own’s missing father (he was out bird watching – how ironic!). Unfortunately for them, it turns out that they’ve happened upon a secret research facility (I would say ‘top secret’ but it’s more of a large shack out in the swamplands, so it’s not exactly the Umbrella Corp’s underground Antarctic institution) where experiments to create a breeding population of terror birds are ongoing.