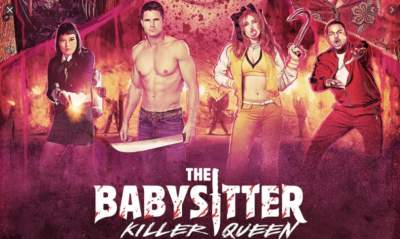 Just when you thought it was safe to check out Netflix tonight, the streamer has dumped a sequel to its 2017 hit The Babysitter into its endless river of algorithm-calibrated goo. But while some critics apparently found the first movie charming–and appreciated the presence of rising horror-comedy star Samara Weaving (Ready or Not)–The Babysitter: Killer Queen fails on every level to make even a perfunctory case for a follow-up.

For one thing, Weaving is not the lead baddie this time around, even if most of the rest of the cast from the original encore here. Now you may ask how all the other slain cultist villains return. But a script that combines “no one’s ever really dead in horror” contrivances with some motivation-destroying retconning makes it easy. Too easy. But nothing about the story makes sense on any level, and it’s a wonder that it took returning director McG and three other bros to hammer this nonsense out.

Two years after the first film, poor Cole (Judah Lewis) is now a junior in high school but still scarred by the night in which his now-missing babysitter Bee (Weaving) and her cult tried to sacrifice him to the Devil. The only person who seemingly believes him is loyal friend Melanie (Emily Alyn Lind), while his parents plan to submit him to a psychiatric school.