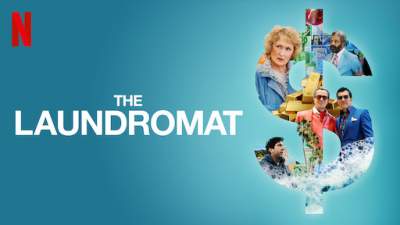 This has not stopped the great Scott Z. Burns (who is also at TIFF with the excellent “The Report”), who collaborates again with the director of his scripts for “The Informant!,” “Contagion,” and “Side Effects” to tell another story of corporate malfeasance with an A-list cast. A wonderful ensemble, a brilliant director, and a genius screenwriter all get together for “The Laundromat,” a film they clearly took very seriously, but that they never figured out how to make entertaining to an audience. “The Laundromat” will draw numerous comparisons to Adam McKay’s films—I’m not a fan of them, but he knows how to make dry subject matter easy to understand and entertaining to modern audiences. Burns and Soderbergh never quite cracked “The Laundromat,” even if there are individual elements here to admire.

One of the problems with “The Laundromat” is star power leads one to believe that Meryl Streep’s Ellen Martin is the protagonist of this story. She’s not. She’s only one of several characters in an episodic structure that’s designed to illustrate the reach of shell companies and the corruption that grows from wealth. She’s the first one we meet, a woman whose husband (James Cromwell) dies in a ferry accident. The ferry owners (Robert Patrick & David Schwimmer) discover that the insurance policy they had was a scam. It was part of a system of companies that basically don’t exist, run through a high-powered con artist in the Bahamas, played by Jeffrey Wright. And so Martin’s settlement check ends up a fraction of what it should have been if greedy people hadn’t been, well, greedy.