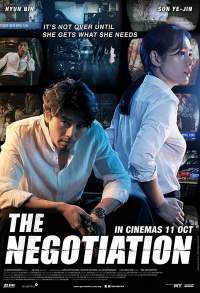 Marked by its lack of intensity, the South Korean crime drama “The Negotiation” stars Son Ye-Jin as no-nonsense Seoul police inspector Ha Chae-youn, who specializes in defusing hostage situations, and Hyun Bin as charming arms dealer Min Tae-gu. Laden by melodramatic turns and an exposition-heavy last act, the slack programmer never develops into the thriller it aspires to be.

Chae-youn, shaken by a failed intervention that results in a young woman dying in her arms, attempts to resign from the force but is instead summoned to headquarters, where she’s thrust into a video chat with Min. As the Korean military bears down on Min’s compound on an island in the Straits of Malacca where he is allegedly holding captives, Chae-youn is tasked with finding out his demands.

“The Negotiation” unravels from the inside out, lurching from improbable to implausible to just plain ridiculous, and writer-director’s Lee Jong-Suk’s by-the-book filmmaking does little to raise the stakes.