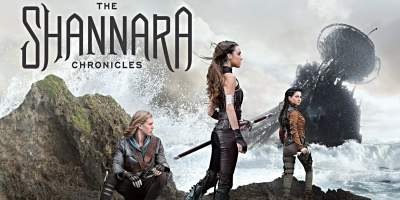 Shannara! Why are you walking away? Where are you going? Was it something I said? Was it multiple things I said – on more than one occasion? Come back!

The Shannara Chronicles is over. For now, at least. Its second year has been a bumpy ride with potholes (and plotholes) of varying size and quality. But, here we are. It’s done now – and sooner than we expected.

We’ve learned a lot about life in the Four Lands this year. We’ve learned that being the illegitimate child of a Druid warrior isn’t what it’s all cracked up to be. We’ve learned that time paradoxes don’t necessarily have to be a thing if you’re not feeling it. And, most importantly, we’ve discovered that Amberle isn’t ever coming back – ever – so stop being salty about it or she will block you. Real talk.

Shannara has been one big all-you-can-eat buffet of genre conventions this year. Some of it I could stomach, some of it I had to spit into a napkin to throw away later on when nobody was looking. All in all, whatever cliches I managed to force down my throat satiated my appetite for post-apocalyptic fantasy fun. And that’s what really matters.

If you asked me if it was an improvement over the first season, I…well, I wouldn’t know what to tell you. Both seasons have their perks and flaws. Both can be insufferable for different reasons, just as they can be entertaining for others.

But the question remains: is Shannara addictive? The jury’s out on that, too. If I weren’t writing reviews for this show, would I go out of my way to keep up with what’s going on?