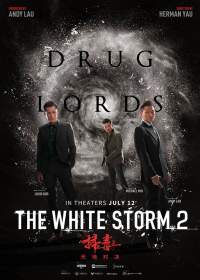 The Hong Kong Triad mob thriller “The White Storm 2: Drug Lords” is a cynic’s delight, though often not in the ways you might expect. As a message movie, “The White Storm 2” is pretty toothless. Viewers are asked to decide for themselves which scuzzy public figure is worse: untouchable drug kingpin Chun-kwok Fung (Louis Koo) or reformed mobster Shun-tin Yu (Andy Lau), now a celebrity philanthropist who could, but chooses not to narc on Fung. Spoiler alert: the drug dealer comes out of this popularity contest looking the worse for wear.

Then again, waiting for Yu to be brought to justice is weirdly cathartic. Writer/director Herman Yau captures a rarely considered political reality: the long, agonizing wait before a conspicuous, politically enabled villain screws up badly enough to be shut down for good. So while “The White Storm 2” may not be as sensational or as nuanced as it could have been, it is a satisfying dramatization of reluctant maneuvering.