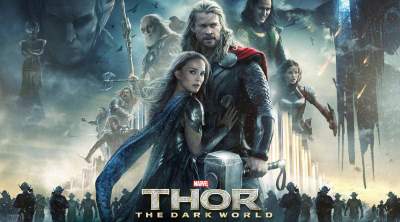 Overview – Exploring Thor’s relationship with the Asgardian all-father Odin, as well earthbound companion Jane Foster, “Thor: The Dark World” follows the God of Thunder to The Nine Realms beyond Asgard and earth. And as his evil half-brother, Loki, returns for Asgardian justice, a new threat rises. Also rejoining Thor are his fellow Asgardians, Lady Sif, gatekeeper Heimdall and Warriors Three, as they encounter mythical Norse creatures among evildoers.

‘Thor: The Dark World’ is the movie that I was apprehensive the first one would be. An overly serious space opera, with overcooked special effects, meaningless villains, a backstory that requires copious amounts of exposition, little reason to care about what’s happening, basically a stopgap for Disney and Marvel to continue plodding towards the seemingly insurmountable mountain of sequels planned for the future. The first ‘Thor’ film, under Kenneth Branagh’s expert direction, avoided most of the clichés one would expect from a comic book movie about an alien demi-god. The second film, embraces those clichés. Wallows in them. And, eventually, after treading water for 90 minutes, sinks and drowns in mediocrity.