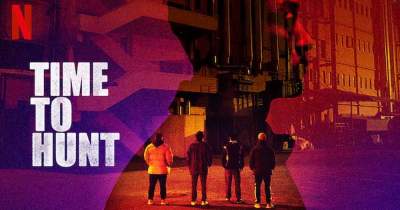 The dystopian world in the new Korean thriller Time to Hunt doesn’t look too different from our own lockdown-hit present, except for the fact the characters don’t wear masks. The streets look the same –lots of cars but few little people. The Korean currency has become worthless; the U.S dollar has taken its place. It’s a time of desperation for three youngsters and their families barely inching by in the ghettos. They need a quick scheme to exit their miserable existence.

Enter their friend Jun-seok, a felon who just lost three years for an ill-advised crime. When he comes up with another plan – to rob a mobowned casino– the others reluctantly go along. We have seen this story before. But Time to Hunt proves it’s still possible to mine a truckload of intense moments from this simple premise, provided the packaging appears fresh.

The plight of the four characters – one of them played by Parasite’s Choi Woo-sik – make them worth rooting for, despite their proclivity for breaking the law to survive. Stealing from the mob has its consequences, naturally, and these four are not ready for what is yet to come. When a terrifying killer called Han (played by Park Hae-soo) picks up their trail, they are left with very less time to catch a breath or change their sweat-drenched clothes. Han’s menacing presence alone justifies this film’s existence.